Yes, indeed She is.

Like most people, ancient and modern, the Egyptians depicted their Deities (at least the anthropomorphic ones) as more beautiful, more powerful, more perfect images of themselves. So, of course, Isis was shown as a strong and beautiful Egyptian woman.

Images of the Goddess show Her with the skin color and features of Her countrywomen and men. As Egypt is an African nation, Isis is an African Goddess. In at least one ancient text, She is specifically a black African Goddess when She says of Herself, “I am the Nubian and I have descended from heaven.” (Nubia was what is now southern Egypt and northern Sudan. Nubian pharaohs ruled Egypt as its 25th Dynasty.) Another text, from the Ptolemaic temple of Hathor at Denderah, says that Isis was born a “black and ruddy woman, endowed with life, sweet of love”.

When the worship of Isis passed into Hellenistic lands, the Greek symbolism of the color black came into play in Isiac iconography as well. In Greek-influenced lands, black was associated with death and the underworld, thus it was the Greek color of mourning. As Isis is a mourning Goddess, She was often depicted wearing robes of black and Melanophoros, “Wearer of the Black,” became one of Her epithets.

In Egyptian symbolism, the colors black and green were interchangeable. Everything we associate with the color green—life, freshness, renewal—the Egyptians also associated with green and with black. In scenes of the Otherworld, we often see both Isis and Osiris painted with green skin. Just as the rich black silt from the Nile brings forth bright green plants; the rich darkness of the Otherworld is overseen by the bright Goddess and God of Renewal, Isis and Osiris. 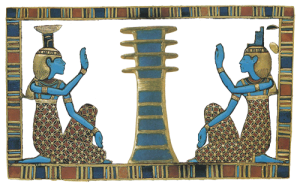 In the same way that green and black were associated, green and blue were also related concepts. Blue was specifically used to indicate the waters and the heavens, and of course, both were essential for the greening of the land of Egypt. Since all these concepts were connected, the throne symbol on Isis’ head was frequently painted in black, green, or blue. Her skin might be blue, too, as in the example above. And, like other Deities, Isis was described as having blue lapis lazuli hair.

But the ancient Egyptians didn’t stop with black, green, and blue. Since skin color was symbolic, it was very flexible. Isis is also shown with the yellow skin that Egyptian artists sometimes used for Egyptian women or the golden skin of Goddesses and Gods. Indeed, Egyptian tradition held that all the Deities had golden skin. This was literally true when it came to the many statues or reliefs of the Deities that were covered in gold. And it was symbolically true as a way to express the purity and incorruptibility of the Divine Ones for gold is the one metal that never corrodes.

When Isis made Her entrance into the Greek and Roman world, just as the Egyptians had, those worshippers, too, portrayed their Goddess as more perfect reflections of themselves. There are a number of striking Roman statues of Isis in which the flesh of the Goddess is carved from white marble while Her robes are carved from black. (I honestly don’t know whether these statues were originally painted as we are discovering many ancient Greek statues were. Yet the fact that the artist used two different colors of marble seems to indicate that the marble itself was intended to be seen. And even if they were painted, the Goddess’ skin would have been pale, as She was portrayed in polychromatic Roman paintings.)

The Isis image on my own altar is black in both color and features. But I also have a green Isis, several golden Isises, a terracotta Isis, a turquoise Isis, and the lovely Farnese Isis on the left is one of my all-time favorite images of Her.

Yet all these images are simply ways human beings have portrayed Her so that we can more easily relate to Her. Isis is a Goddess, not a woman. She is not exclusively Egyptian or Roman or American or Japanese. She will always reflect back to us our own faces. She is of no color—and of every color. She is a Black Goddess, a Green Goddess, a White Goddess, a Red Goddess, a Purple Goddess. She is my Goddess. She is your Goddess. She belongs to us all. But more importantly for those who love Her, we all belong to Her.

20 thoughts on “Is Isis a Black Goddess?”