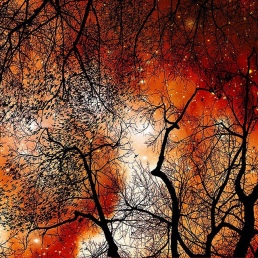 In these past few days, we have been remembering our friends and family who have passed before us into the Otherworld with both tears and laughter. It has put me in a sweet, melancholy mood. As amber and scarlet leaves still cling to their branches and the decayed-honey scent of fallen foliage fills the air, my side of the world has rolled over; darkness now overcomes the light.

So I have an ancestor story for you. For me, it is a sad tale, for it takes place at a time when Christianity had come into power and outlawed all other worship. The story comes from a work known as the Life of Severus by Zacharias probably written in the 490s CE. As early Christian literature, it is extremely hostile to Paganism. In other words, we shouldn’t expect unbiased truth. In fact, according to some recent scholars, we shouldn’t expect much truth in this polemical work at all. Nevertheless, since Isis appears in it, it is of interest to modern Isiacs.

Severus and Zacharias were friends; Severus eventually became Bishop of Antioch, while Zacharias became Bishop of Mytilene. Zacharias wrote the Life of Severus to defend his pal from the charge of having been a Pagan in his early life, which in fact, he had. But much of the work really isn’t about Severus at all. Rather, it’s about the conversion of a particular student, named Paralius, to Christianity. According to Zacharias, one of the key incidents that encouraged his Christian conversion concerned Isis of Menouthis.

Menouthis was a suburb of Alexandria and neighbor of the city of Canopus. Both were sacred cities and homes to Isis centers known for healing and for incubation, or oracular dreaming. At Canopus, Isis was joined by Her consort Serapis, Himself a powerful healing Deity. Canopus became quite an active center and attracted many visitors from Alexandria as well as other Mediterranean cities. Canopus probably came to prominence first, followed by Menouthis. We have a record of an image of Isis of Menouthis being sent to Isis of Pharos. The Oxyrhynchus papyrus notes that Isis is called “Truth” at Menouthis, no doubt referring to Her true healing oracles.

Today, the cities are underwater, having submerged rather quickly, geologists think, due to a series of catastrophic earthquakes, likely followed by tsunamis. Underwater archeologists now believe they have located Menouthis, Canopus, and the port of Herakleion. One of the first things to be brought out of the waters when the cities were discovered was a beautifully carved, if headless, statue of Isis.

Our story takes place after the Roman Empire is officially Christian and Pagan worship is outlawed, and has been for nearly a hundred years. The Isis temple at Menouthis was operating, but in secret with the local monks looking the other way. So all this is very clandestine.

Zacharias tells of an philosopher named Asclepiodotos and his wife Damiane, who was unable to conceive. Then Asclepiodotos has a dream. Here’s how Zacharias, puts it. He says that Asclepiodotos received

“an oracle (or, rather, he was deceived by the demon appearing as Isis) according to which the Goddess [my capitalization] promised him children if he went with his wife into the temple that the Goddess had at Menouthis, a village 40 miles away from Alexandria. He stayed some time in Menouthis and offered considerable sacrifices to the demons. But it was to no avail. The sterility of his wife persisted nonetheless. Having believed that he saw in a dream Isis lying beside him he heard it declared by those who interpreted dreams there and who served the demon expressed in Isis, that he ought to join himself to the idol of the Goddess, then have sex with his wife—and thus a child would be born to him.”

Apparently no pregnancy was immediately forthcoming, for the priest of Isis next sent Asclepiodotos to a nearby town of “Astu” (which looks suspiciously like a word derived from Isis’ name) and there a local Isis priestess gave him a baby. Thus Asclepiodotos and Damiane did indeed return home with a child.

Apparently the story was put out that this was a miracle of supernatural proportions and when the truth came out, it was turned into an anti-Pagan scandal. It was one of the things that Paralius debated with his brother, a Christian monk who was pressuring Paralius to convert. Interestingly, we have one other mention of this story, from Damascius, a philosopher known as “the last of the Neoplatonists.” He says that both Asclepiodotos and Damiane were people of very good character, and one very fragmentary sentence notes that Asclepiodotos took his wife home “when he saw that she was pregnant.” Interesting, huh? Could it indeed be magic? Or the magic of easy Egyptian adoption?

Now, back to Paralius. For him, the final blow came when he went to incubate at Isis’ temple and dreamed that She warned him against a fellow student in his class “who is a magician.” According to Zacharias, Isis gave the same warning to the other student about Paralius. Try as he might, Paralius could receive no further information from the Goddess, so he became angry and turned away from Her to the religion of his brother. From that time on, Paralius ridiculed “the orgies of the Priestess of Isis.” Eventually, this so angered the Pagan students in Paralius’ class that they turned on him. Christian students came to his rescue and this clash erupted into a full-fledged riot.

As part of the rioting, a mob descended on Menouthis. The raiders opened the treasury, which still contained sacred images. Some of the statues were destroyed during the first day of the riot. Others were encircled throughout the night by canticle-singing Christians and destroyed the next day when the temple itself was razed to the foundations. Still others—those made of valuable materials or of particular artistic merit—were turned over to the Church.

But the people still needed healing Deities. So eventually a healing cult of the saints Cyrus and John was established and the saints gave healing prescriptions in dreams—and perhaps even helped infertile couples—just as Isis always had.