I’ve been wanting to tell you about the Temple of Isis in Pompeii, which Adam and I visited on our recent trip to Italy.

One thing we know about Pompeii is that, in a city of about 20,000, about 10% of the population considered themselves Isiacs. So about 2,000 Isiacs were in Pompeii at the time it was buried in volcanic ash. Assuming you didn’t have to get them all in the sanctuary at one time (see previous post about the size of the temple), that would have worked pretty well. Out of a group of about 2,000 Pagans (which is my personal estimate for the Pagan population of my hometown of Portland, Oregon), how many of them would actually show up for the rituals at any given time? About as many as would fit in that modest temple…a hundred at most.

But being buried in volcanic ash wasn’t the first blow suffered by that lovely temple. Pompeii had ALSO had a recent earthquake, in 62 CE, with the Vesuvial eruption following in 79 CE. The earthquake had rattled down a lot of Pompeiian structures. In fact, one of the reasons that the Isis Temple was so well preserved (it is considered the most well preserved in Pompeii) was that it had been rebuilt following the earthquake…and not all the other public buildings had. A wealthy Pompeiian, Numerius Popidius Ampliatus, had had the temple rebuilt in the name of his six-year-old son, Numerius Popidius Celsinus, so that Numerius Junior would have a free ride to the Senate. (Politics never change.) But what’s of interest to us is not the political machinations of Dad Numerius, but the fact that rebuilding the Isis temple would have conferred that much status. Clearly, Isis was popular; connections with Her and the support of Her religion were politically expedient. (Don’t blame the Goddess for this; I’m sure She had nothing to do with the politics.) Here’s a pic of the plaque Numerius Senior put up over the entrance to the temple:

The temple was located behind the city’s main theatre building, which emphasizes the close relationship between Isis and the God of the Theatre, Dionysos or Bacchus. Dionysos was identified with Osiris; and so, He was a natural partner for Isis. In fact, a sacred image of Dionysos, along with His requisite panther, was located in a special niche on the backside of the main Isis shrine. On either side of the Dionysos image were carved large ears. The existence of these ears shows a direct connection between the Italian temple and Egyptian tradition. Egyptian temples frequently had God-sized ears carved on the back of the temple, just behind the innermost shrine. The common folk, who could not enter the holy of holies, could—by virtue of these Divine ears—speak directly to the Goddess or God of the temple. A hole drilled through the back of the temple and a priest or priestess on the other side served to transmit the concerns of the suppliant to the Deity. No doubt the same thing was intended in Pompeii.

This next photo is the main shrine, the naos and pronaos, of the Isis temple. The sacred images of Isis and Osiris would have stood here. There was a mosaic floor in this area, which has now been lost. Lost where? I don’t know. Perhaps stolen from the site. On either side of the main entrance (the central opening you see here), were two niches, perhaps intended for images of Anubis and Harpocrates, to Whom two altars within the sanctuary were dedicated. 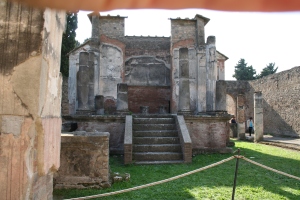 The main shrine of the Temple of Isis in Pompeii. Photo copyright Forrest 2009.

The low structure on the left is the main altar; the remains of a sacrificial fire and burnt offerings were found there.

Just to the left of the main altar is a small building where they kept the sacred water for purification. Likely, this would have been Nile water. Roman satirists mocked female Isis devotees for making pilgrimage to Egypt to bring back the sacred waters of the Nile. (We cannot be sure whether the satirists were more interested in mocking Isiacs or women by such statements, but there you are.) The sacred water was kept in an underground chamber.

You can see a little way into the building, which is about the size of one of those pre-fab garden sheds. The main altar is on the right, in front of the building.

The thing we can’t really imagine from any of these pictures is how the living temple would have looked. Paintings covered most all the walls; colorful mosaics decorated both walls and floors; shaven-headed priests and veiled priestesses moved to and fro in service to the Goddess.

Behind the main shrine, there was a large-ish room in which, I subsequently learned, the initiates of Isis met. I didn’t take a picture of it because the site really didn’t look like anything much. But that was because they took all the good stuff to the museum. The walls had been covered with images evocative of Egypt. Near the entrance, archeologists found a beautiful marble head of Isis. The body of the image was of wood and was dressed in garments of real fabric and would have been cared for on a daily basis by the temple personnel.

This is not that image. But it IS one of the Isis statues rescued from the temple and…which…I…did…not…get…to…see…in…person…because…the…Naples Museum…didn’t frickin’ cooperate. It is, however, one of my most favorite Isis images, and I leave you with Her graceful Self: